When my husband and I first got married, I was NOT good at cooking. I tried to stay with boxed dinners, sandwiches, Ramen noodles, etc. Slowly, we both got tired of those dinners, and then the kids came along and I decided I needed to expand my skills. Little by little, I became more comfortable in the kitchen, and today, I absolutely love cooking/baking. Its fun to think of where I started almost seven years ago, to today. One of the most common meals I made when we were newly married, was Hamburger Helper. My favorite was the beef Stroganoff. I decided that I needed to attempt to make it, only this time, from scratch. Surprisingly, I nailed it. This version tastes just like Hamburger Helper ,only less “artificial”!! Not only is it tasty, but it was a hit with my kids, and was quick to throw together. I definitely will be making this again!!!

Brown the meat in a skillet over medium-high heat. Drain fat and add in cream of mushroom, worcestershire sauce, garlic, and parsley. Slowly add in broth and allow to simmer for about 8-10 minutes. Add in sour cream and mix well. While this is simmering, cook noodles according to package. Drain pasta and serve meat sauce over top of it. Sprinkle with Parmesan. Serve! 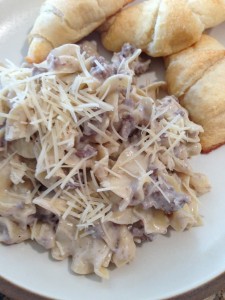