My hubby is awesome. If you read through some of our breakfast posts, you will see that my hubby has made a lot of the recipes for the family. Its fun because he enjoys baking with me, so its a common interest between us!! This past weekend, he really wanted cinnamon rolls. We had run out of the store bought kind, so in my head I thought, “lets run to the store and grab some”. In his head he thought “why don’t I make some for us with the stuff we have in the house”. His thought ended up winning, since he was willing to make them, and he whipped these up. They were delicious, even more so since I was able to read a book on the couch with my coffee, and have a few brought over to me!! See, my hubby is awesome, huh?? : )

Lay out half the crescent dough (four triangles) and pinch the seams together. Using a rolling pin, flatten the dough until about 1/4″ thick. Brush on half the butter and sprinkle cinnamon/brown sugar on top (until desired amount is reached). Sprinkle on chopped pecans if using. Roll dough into a log and cut into about 8 pieces. Place the mini rolls into a non-stick mini muffin tin. Repeat steps with other half of dough, until you have 16 mini rolls. Bake in a preheated oven according to crescent directions. Once cooked, mix together the milk and powdered sugar. Pour icing on top of rolls and serve warm. 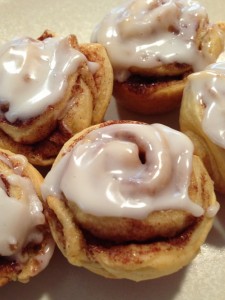